Perpetually blue skies, crisp mountain air smelling of pine, and foothills glistening with snow. The wonders of Colorado are not few and far between, but to me it’s always just been a second home. When I left LA to spend Christmas with my Dad this year though, I decided to rediscover Boulder in a way that I hadn’t before. And with the exception of opening presents on Christmas day (Okay, and going to see Star Wars) I truly did have an impressively irregular holiday weekend.

As for the soundtrack on this one, I picked a good mix of comforting rock, old familiar melodies, and bluesy tracks inspired by my Dad’s choice of music while cookin’ up dinner in the kitchen every night. To me, these songs are the epitome of Colorado, of comfort, and of home; wherever that may be for you. So next time you’re in Boulder, here are a few of my favorite things, along with a customized playlist made just for the occasion. 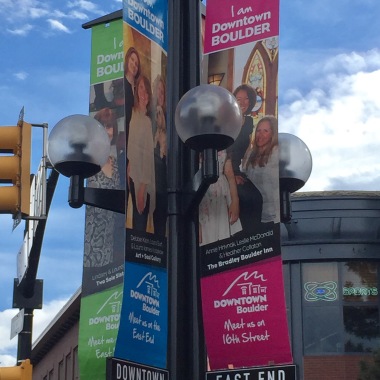 While I’ve been to The Pearl Street Mall more times than I can count, I made it a point to drop by some new shops and restaurants on this particular trip to keep in line with my overarching theme. If you haven’t been, let me assure you that The Pearl Street Mall is really nothing like a mall. Though it’s gotten slightly fancier and perhaps more chain-y over time, it’s still just 4 blocks of pedestrians-only cobblestone, filled with great eats, imaginative stores, musical endeavors of all kinds, and dudes with dreads who smell like mountains of marijuana. In summary, it’s enchanting.

Naturally my first task was to find a good place for lunch. Not only that, but a place that was open on Christmas Eve. After visiting a few spots that ended up being closed (to my stomach’s dismay), we settled on Aji: a Latin American joint that my family had recently tried for the first time and loved. The place was mostly empty because of the holiday so there wasn’t much ambience, but what it lacked was made up for in exotic Spanish decor and comfy couches. If only snowflakes had been floating peacefully by the windows, it might’ve been truly wonderful. But alas, it never seems to snow in Colorado when I show up.

After mulling over the menu and taking some recommendations from my Dad, I ordered a cup of green tea and the veggie enchiladas. I’m not a big enchilada person (or a vegetarian for that matter) but I promise you that these cheese and chili-cream filled morsels are absolutely delicious.

Our next stop on Pearl was a Chocolate shop that I have to imagine is the Goddess of all chocolate that exists in this world. On any given day, you can pick from 50 assorted flavors of truffles infused with fruit, espresso or beer from local Boulder breweries. If you’d prefer to overindulge, then you’ve got choices like the Chocolate Eggnog Torte or The Left Hand Milk Stout Cake.

After gawking like a newborn, I finally decided to splurge on a set of 6 hand-picked chocolates of my choice. Since they were going to be a gift though (and my mouth was watering like a lunatic), I decided to buy a little pre-wrapped chocolate for myself at the cash register. In my impulsive insatiability, I forgot to read the label and tore off the wrapper immediately. I bit halfway into the chocolate and an explosion of fiery liquor shot into my mouth, while the rest of it spilled down my chin and onto the sleeves of my jacket. I stood there staring at my family in utter shock as I realized I’d basically just ingested a shot of alcohol, rather than the dark chocolate truffle I was blindly hoping for. Of course laughter ensued and I was rushed behind the counter to the sink area like a complete fool so I could rinse the sticky residue off my face, hands and coat. While I’ll probably never show my face in Piece, Love and Chocolate ever again, I highly recommend you go and keep this story in your back pocket as a warning.

Featured song: Birthday by The Beatles

It was the perfect beginning to side 2 of The White Album, and in a similar fashion (but with way less money involved) it was the ideal tune to start my weekend in Boulder off right. Funny as it may seem, my dad was born in the 40’s just like The Beatles, and his 72nd birthday took place on this trip—another reason for my choosing it. Even if you’ve just heard this song once, playing in the background at some bowling alley fifteen years ago, you’ll only need to listen to the first few seconds to immediately recognize the riff. It’s so catchy it’s almost offensive that Paul and John came up with it on the spot. The blues progression accompanied by the perky piano will boost your spirits and make everything around you feel more alive. “I would like you to dance, take a ch-ch-ch-chance!”

While you may not find the Mount Sanitas trailhead on a travel brochure, it’s a true hidden gem not far from the Pearl Street Mall. It also happens to be situated about 100 feet from my brother’s backyard, so he led us there for a crisp evening walk just before sunset one night. It was mostly uphill and lined with varying terrain, but it was a relatively easy climb boasting awe-inspiring views and statuesque boulders that were ever so fun to scramble across. I’m a big fan of all mountain excursions that take less than an hour to complete while still showcasing majestic scenery, so if that’s your thing too, this is the place to go while in Boulder. Ironically I spent the entire hike (all 2 miles of it) casually discussing a future week-long trek along the Pacific Crest Trail, as if this pseudo-hike suddenly qualified me to be an extreme hiker under much tougher conditions.

A relatively new band, The Staves are composed of three sisters who write and perform folksy British rock. I haven’t been able to get this song out of my head since I first heard it, likely because of the classic sound and feel. With influences from Simon and Garfunkel, Teeth White is filled with awesome harmonies, breezy guitar, and even breezier vocals. It’s perfect for wandering about outdoors which is why it pairs well with the hiking portion of my trip. To me, this song also represents a sort of rift you can experience in your late 20’s— of trying everything under the sun but still not being able to get it quite right. “I got my teeth white and my jeans tight, I got my hair long and it’s still wrong.” 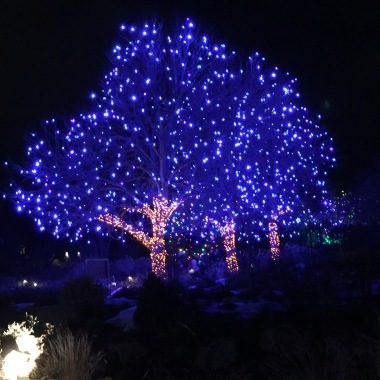 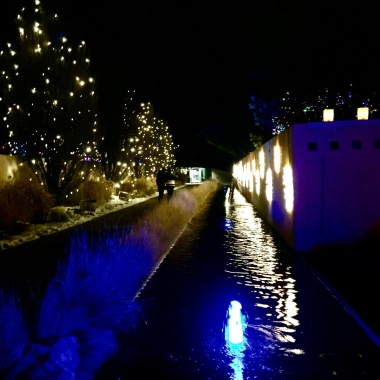 Even on a chilly Christmas night layered and swaddled from head to toe, the Denver Botanic Gardens was another outing I’m glad I didn’t forsake for the couch. The gardens are beautiful just about any old day, but this time of year families chatter excitedly, strolling through the glowing forest mitten-in-mitten with hot apple cider at their lips.  Everywhere you step, your path is illuminated by iridescent light sculptures and sparkling tree canopies.

Then there’s the Lumenscape: an endless field filled with lively sound-reactive lights. It’s just as fun as it sounds, but also just as annoying if you can imagine groups of children screaming “Deck The Halls” at the top of their lungs while animated lights bounce in rhythm. Amidst it all, I realized that I was truly at the epicenter of the holiday spirit on steroids. While normally I may have found this overwhelming and artificial, I was reveling in the fanciful beauty of the lights so much that I had no problem drinking the kool-aid, or perhaps the peppermint latte in this case.

After our 45 minute journey had come to a close, I came to one final realization; that it was impossible to pass by the impressively gigantic gift shop on the way out. Just be prepared to tell yourself No! repeatedly, until you no longer want the overpriced jewelry or the 30 dollar candles that naturally look better than the ones you have at home.

Featured Song: Make Your Own Kind Of Music by Mama Cass

While you may only recognize this song from season 2 episode 1 of Lost (shout-out to my boy Desmond in the hatch), it’s got a hell of a history going all the way back to 1969. The lyrics are similar in sentiment to the worn-out “dance like nobody’s watching” mentality, but the whimsical tune and extravagant instrumental are in line with any night-time excursion; especially one filled with animated lights.  “Sing your own special song, make your own kind of music, even if nobody else sings along” 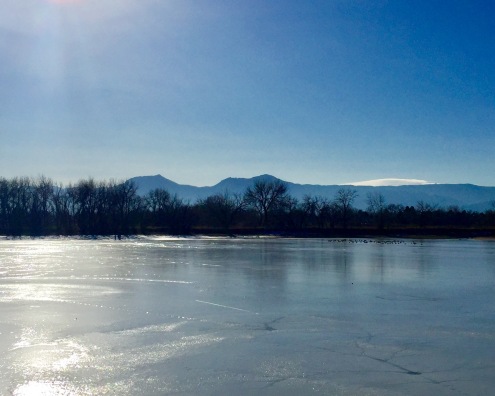 On my last morning in Boulder we went for a stroll around Twin Lakes. I’d never been entirely sure why the name was plural as I’d only ever encountered one; but it turns out there is in fact both an East and West lake. The closest trail to my family’s house leads to the West and also happens to be the off-leash section, so well behaved dogs can run free ahead of their owners. The mile-long path around the water is lined with views of the Rockies and is generally pretty empty since it’s not a well-known Boulder attraction. This allows for a peaceful stroll with stunning shades of blue everywhere you shift your gaze, both above and below. And, as an added bonus, if you ever get the fortune of running into my dad you can be sure he’ll give you a proper rundown of every owl that resides in the area (along with the specific tree trunks they occupy).

The band is fictitious as it was created solely for the film O Brother Where Art Thou, but this particular version of the song holds special nostalgic value. It reminds me of the first time I saw the movie; as a teenager staying with my dad in his old A-frame house in the mountains of Nederland. Curled up on a cozy loveseat, the classic American folk song suddenly came to life for me and represented a warm, free spirited existence. Because of that, this song concludes my trip to Boulder and is an essential piece of my blues-inspired playlist. “I am a man of constant sorrow, I’ve seen trouble all my day. I bid farewell to old Kentucky, the place where I was born and raised.”