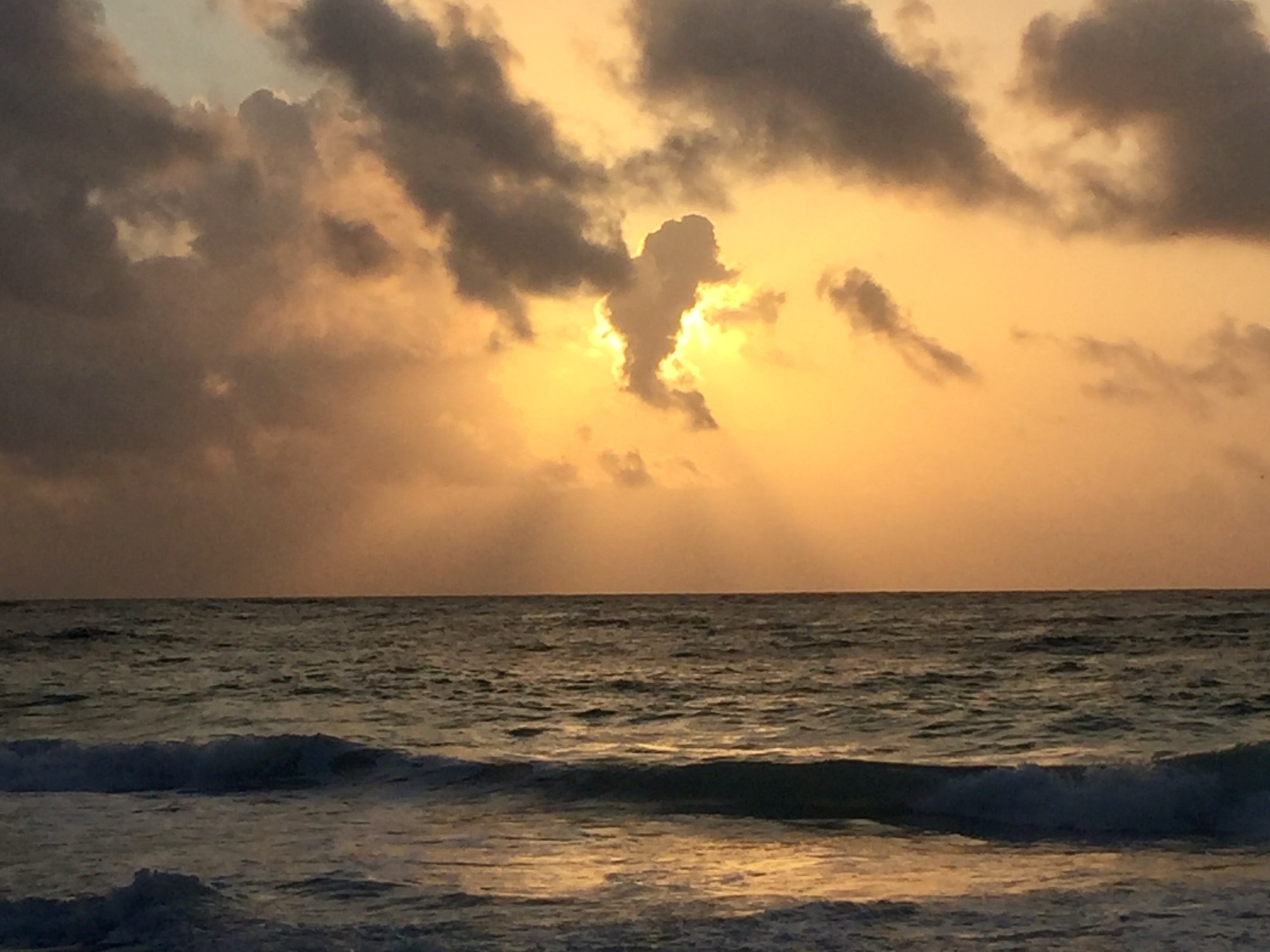 Sunscreen, toothpaste, an international data plan, and beginner Spanish. What do these things have in common? Just that they all completely slipped my mind before heading to Mexico for 5 days.

It wasn’t until I was about half an hour from landing at the Cancun airport that I finally jolted out of my sandy daydreams, realizing, oh shit — How am I going to find my best friend without any LTE? How are we going to make the 2-hour drive to Tulum without GPS? Luckily, with the help of some spotty WiFi and a multitude of humiliating Lost In Translation moments, Christi and I were able to partake in a sweaty reunion in the 95 degree heat, only 30 minutes past schedule. One slightly off-kilter car rental experience later, and we were ready to hit the road.

All throughout the trip to come (though not documented in the highlights written below), random snafus like this one would bubble up and result in a sneaking feeling of general disarray, which seemed like the world’s way of slapping me on the wrist for my lack of preparation. Touché, world. Visiting a foreign country isn’t always a breeze, and this particular vacation certainly wasn’t – but as rocky as it was, it was still full-bodied and filled with exuberant, messy adventure. You’ll find the playlist quite similar in nature.

Featured Song: Crazy On You by Heart

The playlist opener belongs to none other than Ann and Nancy Wilson, with an extravagant intro guitar solo and some slow-building percussion. It gains momentum and has a loud, almost maniacal chorus that’s perfect to belt out during a road trip braving the disorderly highways of Mexico. By the way, does anyone know what the speed limit actually is? Asking for a friend.

Our hotel ended up being at the very end of the Tulum strip, just a bit more out of the way than I’d hoped — but any convenience it lacked, it made up for in secluded charm. Imagine a group of picturesque jungle cabins lining a beach; a hammock on each deck, and tropical palm leaves shading your windows. That’s Rosa Del Viento. The sandy pathways leading from our cabin stairs to the beach were also adorned with hammocks, just in case we needed a rejuvenating pit spot during the .0001 mile walk to the shoreline.

As we strolled alongside the water’s edge watching the sky turn pastel purple that very first night, Christi and I realized with amusement that this was likely the most romantic vacation we’d ever take, and it just so happened to be with each other. Everywhere we looked there were couples wrapped in fluffy hotel bathrobes together, drinking Pina Coladas, angling their iPhones perfectly to capture their happy vacation faces and accessories. Nonetheless, we were pleased to be the resident BFF’s of the week.

Let’s just get this out of the way first — The Tulum strip contains some of the most bougie and overpriced shops and restaurants you’ll ever find. Not in the Vegas or Times Square sense though. Upon first glance, it will appear to embody the free-spirited, cultured, zen vacation you always wanted. This isn’t to say it’s totally deceptive; think of the strip as “Rainforest yoga retreat meets SoHo boutique lineup”. We found some hidden gems and a few spots on the side of the road with cheap art and souvenirs, but we also found shops that sold tiny leather coin-purses for upwards of 1000 bucks.

As for the food, it’s definitely upper-class tourist central, so don’t expect typical Mexico prices (or meals for that matter). One of our favorite places ended up being a rustic, dimly lit beachside Italian restaurant called Posada Margherita. The prices were listed in US Dollars and it was filled with beautiful European couples dressed in gauzey attire, but the pasta was freshly handmade and absolutely delicious. The added benefit (or maybe the primary attraction for some) is that this place had so much ambience. The entryway is lined with hanging plants and cobblestone, and everything is softly illuminated by lanterns and vintage string lights. Bonus: Posada Margherita also happens to house a little boutique filled with pricey knick-knacks, just in case you feel like dropping 30 bucks after dinner on a candle that smells like saltwater (no judgement — sometimes I’m in that mood, too.)

If you’re looking for an exotic cocktail in a less busy part of town though, head on over to Wild, a new bar on the edge of the strip. It was one of the only places within close walking distance of our hotel, and despite its name and beautiful outdoor arrangement, it was completely dead on the night we visited. Our waiter told us they serve the best drinks in all of Tulum which was surprising given the lack of crowd, but since he did light my cocktail on fire, I’m inclined to believe him.

A spirited, lively Paul Simon jam with a funky drum intro that becomes a constant throughout. It’s the kind of song that makes you want to jump up and down (if only you were as light as a feather) or break into a choreographed dance routine on the streets of Tulum. It’s got that simultaneously frantic yet soothing vibe that is perfect for exploring the strip at dusk. By the way, if you haven’t seen the indie comedy named after this song, go watch it. 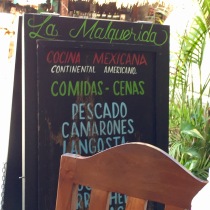 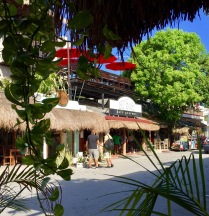 Don’t get me wrong; The strip has a unique, out-of-this-world energy — But once you’ve inevitably tired of it, head on over to the historic old town of Tulum. It would be a shame to miss the real city center and leave the area without this gritty piece of the puzzle. We only got to spend a late afternoon there, but it was burgeoning with culture and a vibrant mix of people in comparison.

If you’re looking for affordable souvenirs to bring home, you’ve found your destination. Colorful shops line the street, and their owners are actually willing to bargain a bit, which is not the case on the strip. After we’d collected enough gems to fill an entire suitcase, we stumbled upon a shaded Mexican restaurant, equipped with rope-swing seats and an outdoor patio. It goes without saying (but I’ll still say it) that I rely on Yelp for food recommendations, so without internet access we simply had to cross our fingers and hope for the best.

Luckily, La Malquerida was a testament to why it can be extremely rewarding to pick a restaurant at first sight. The chicken fajitas were juicy and delectable; absolutely worth writing home about. The wait staff was unbelievably friendly and helpful (moreso than anywhere else we’d been at that point) even though we could barely speak a lick of Spanish. Seeing as how my last (and only) 3 international trips have been to Spanish-speaking countries, it looks as though taking French in High School really did come back to bite me.

Finally, a track on this playlist that was written in modern times! It’s got a retro rhythm and a soulful old-timey rock ‘n roll sound, accompanied by some good old snapping. This is a let-loose song about giving in to temptations and going back to basics. It feels like the perfect contrast from Paul Simon and the Tulum strip. I first heard this song during season 3 of Fargo and fell in love with its simplicity and raw emotion.

I’ll always remember The Ruins as the place where I got the most sickening sunburn of my life. The good news is that the views and history here were so awe-inspiring that all I can do is regret not wearing SPF 1200 (something I should’ve patented after this trip). In all seriousness, if you’re as pale as I am, please take this as a warning that spray-on SPF 50 does not cut it here.

The line to buy a ticket and get into the Ruins is long, but if you plan accordingly, you’ll purchase some bottled water and fresh fruit on the side of the road beforehand to stay sane. We also just so happened to have a furry visitor while we were waiting — A Mexican coati, which is essentially just your friendly(ish) neighborhood raccoon. This one was a little attention hog, playfully rolling around on the ground and loving the crowd it had produced. That is, until one guy got too close and it yapped its face off at him.

Once we got through the line and were able to start our adventure, we forgot all about the raccoon-thing and were struck by the majesty of the Mayan Ruins.  Each ancient structure that we came across seemed more magnificent than the one before. Once the heat got to be too much to bear, we were able to quickly descend the staircase along the cliff’s edge and jump into the turquoise ocean water, mid sight-seeing.

Christi put me onto Slightly Stoopid, offering it up as a suggestion specifically for this playlist. It’s been a while since I’ve been into reggae-influenced rock, but this song definitely takes me back to my hometown festival days. It also feels like a good embodiment of Tulum and the jubilant freedom I felt jumping into the cool water at the ruins that day. 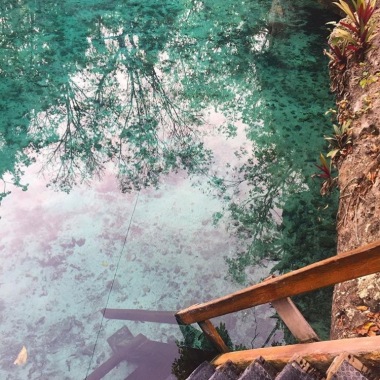 What can I say? That Cenotes are the very best part of Tulum? That a trip here would not be an eighth of as much fun without them? That my life is finally whole, knowing they exist? Alright, I got a bit carried away there, but honestly just by a tad. Cenotes are stunning freshwater sinkholes, and Quintano Roo (the state Tulum resides in), is bustling with hundreds of them.

The contrast in beauty and water color between each can be drastic though, so don’t assume you can just stop at any old Cenote and have a life-changing experience. I would liken the variation to California beaches; some are so unattractive in comparison that they seem to do a disservice to their superior relatives. Look at me, partaking in Cenote snobbery after 5 days in Tulum.

In reality, we only ran into one that didn’t meet expectations and it was still nice and refreshing. The other two were by far my favorite parts of our vacation. If you want to snorkel with turtles and brightly colored fish, go with the full underwater cave experience and check out Gran Cenote (my vote if you only have time for one). For a more relaxed, local environment with less people around, check out Zazil-Ha. It’s a a natural pool-like oasis, complete with a diving board. You can’t go wrong; They’re both of other-worldly beauty.

You know I’ll take any chance I can get to throw Fiona on a playlist. This song is off her most recent album (2012…c’mon girl) and happens to fit in really nicely because of the killer percussion and melody that builds in intensity. It’s my favorite of the collection, so it goes hand-in-hand with the lovely, elusive Cenotes.